How to build a Twitter following you can sell to

Building an engaged audience is tough. But if you do it right, they’re a source of growth for your business.

In seven years, I’ve grown a Twitter following from 700 to 65,700 followers. During that time, I’ve learned quite a bit about audience-led content and how it helps mitigate the risk of launching new products.

This article shares my journey, along with tips and strategies you can use to build a Twitter following you can sell to. I discuss:

Then I leave you with my final pieces of advice to help make the most of your Twitter experience.

As you start to build your audience, it’s important to remind yourself of the following points.

#1. Nobody Cares About You

First, nobody cares about you. That can be hard to hear, but it’s true when you're starting out. Of course, they care a lot about themselves and what you can do for them, but that's where it stops.

So when building an audience, your content should go into a community of deeply invested people on that topic rather than only your current audience.

The consequence of having no feedback is:

Even feedback from a small audience helps establish whether or not there’s value in sticking with it or letting it go. At the end of the day, how will you know if an idea resonates if you don’t have that constant feedback loop?

Product-led growth is about making the best possible experience for your users. By being audience-first, you understand your users on a deeper level than you otherwise possibly could.

This helps you frame your product-led strategy knowing precisely who your product is for and the users’ expectations to drive the most value from your product. These are both intertwined in knowing your audience.

Sharing ideas about potential blog posts or copy on Twitter is a great way to see which direction to go, to keep users engaged and delighted.

It can be as simple as thoughts on a problem to see how your community responds – especially when there’s a feature to build on a product. For example, I’ll ask indirect questions about a feature to capture quality feedback about the idea.

If you don’t ingrain value into what you are writing, people will stop paying attention.

In general, I provide as much free knowledge as possible so my audience views me as helpful and thoughtful. When I do need to make “an ask,” it's a lot easier without feeling guilty.

When you're giving help, it’s a natural segway into a product or feature that helps solve their problems — and providing help also prevents communications from feeling “spammy” or “salesy.” It feels authentic.

If you're a freelancer, you don't even have to find your clients. They come to you.

For example, I wrote a thread about landing pages, and it did well. Following that, I received a lot of messages: "Hey, can I hire you as a consultant to revamp my landing page?"

In 2013, when I signed up for Twitter, I tried to Tweet three or four times a day. But I didn’t know how to use it, so I didn’t have much success.

It turns out I wasn't writing well. I've always been good at writing essays, but not writing content for the internet that works with users’ brains.

When writing for the internet, the content should be super short. Every sentence has to grab their attention and push them to the next one. The fact is people don't read on the Internet – they skim.

The questions you need to ask yourself with Twitter are:

If you can’t hook readers with text, emojis and hashtags won’t help. What matters outside of having interesting ideas is how you present them.

I generally believe that DMs affect the algorithm positively (even though I don’t have data to back this up).

When you DM someone, Twitter can see it's more of a selfless act than posting or retweeting. I believe the algorithm rewards you for that effort.

In the early days, when I was only getting one follower per day, I would DM my followers and ask, "What content can I create for you?" That helped me learn more about what people wanted.

Don’t ask for anything in your DM’s. Give users something valuable. Or use it as a tool to build a relationship. That's way more valuable than asking for something.

In the initial stages of building an audience, there’s always more pressure. Here’s something to remember: you will fail.

When you write a ton of threads, you are going to feel some pressure. It’s important to take a break and recharge to come up with worthwhile ideas as opposed to trying to put anything out there.

Even if no one likes what you’ve written, you’ll learn from it. If you post one great tweet, you will not learn nearly as much as if you post 10 "meh" tweets. That’s a fact. Failures helped me deal with the pressure of creating new content for my users, and it also made me more comfortable with trolls.

Get comfortable filling up your content calendar and start pushing out a lot of content to learn.

Be sure to track how specific topics are doing and which ones get traction. Then go deeper with formats and topics within that subset. This helps nail down particular topics you can use to create longer-form content, especially threads.

The more followers you have, the more fake accounts and less active ones you have. Sometimes people follow you for no reason at all. But with smaller accounts, engagement can be high.

Relish the time you have in that growing phase because you'll learn more than when you have 10,000 followers. The learning part is important because you’ll become irrelevant if you don't adapt.

Be radically unique in whatever niche you’re in.

For me, this is a great way to meet new people and start building friendships. It also helps attract users who are my ideal audience.

Around 99.9% of companies are not building in public. With Copy.ai and Float, I make everything transparent. I write specifically about:

While the majority of companies try to make specific information available, we’re actively trying to make everything available.

We aren’t the only ones being radically transparent. For example, Moz also believes in radical transparency, but it’s not super common.

Not only is this interesting content for your followers, but it also builds trust.

Unless you build an obviously valuable product, starting a company as a complete unknown is tough. I’ve tried this myself, launching a bunch of stuff over the past seven years. Guess how many of those things worked out?

In marketing, there’s so much talk about product-led or community-led. In this case, it’s about building something around an audience.

The idea reduces a lot of the risks when launching a product.

When we announced the waitlist for Float, we had just under 10,000 followers. Still, 9,000 followers is a decent enough audience. It resulted in 2,000 people on the waitlist, with 75-lifetime deals sold.

That means we had $12K in the bank before launch.

This is a prime example of how sharing what you’re building can help drive your go-to-market strategy.

Finally, here are three actionable tips that will help you stay on your path to growth.

Relevancy is dying for hashtags.

Hashtags only work if trend-jacking is part of your growth strategy, which isn’t recommended.

When was the last time you searched for a hashtag on Twitter, LinkedIn, or Instagram and read through the responses?

Don’t be afraid to refresh and reset what you think is important to focus on – especially if you're leading a marketing team or product team.

You don’t need to reassess every single day, but don’t be scared to say, "I don't know if this is the most effective thing I should be doing now."

Be open to pivot and adapt.

Seek out the advice of people who have already done what you're trying to do. For example, if you're trying to grow a company or Twitter account, meet with someone who has done it before and ask questions.

You'd be surprised how generous most people are with their time. If they're not, respect that and move on.

Growing a Twitter following takes a lot of time and effort. But it can be extremely rewarding and valuable to have an engaged audience at your doorstep the next time you’re ready to launch a product. 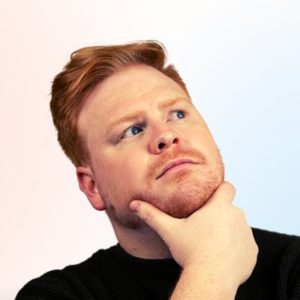 Blake Emal
Blake Emal is the Chief Marketing Officer at Copy.ai and the founder of Float.
Rate this post